Thames Park Secondary School held their opening ceremony on Wednesday. The key note speech was presented live from the House of Lords by Baroness Angela Smith in Westminster. She stated, ‘I wish you all the very best as you start this great adventure’. Amongst the many guests who attended were Terry Piccolo, Mayor of Thurrock and Councillor Andrew Jefferies from Thurrock Council who confirmed, ‘We were all very impressed.  You truly have a great school.’

The founding year group of 120 pupils celebrated the opening of their new school with the newly formed choir singing, ‘Blinded by your Grace’, Alex Finch-Keran playing Ode to Joy and Miriam Ibiayo speaking confidently about the benefits of education.  In his opening speech the school’s Headteacher, Kam Bains, told the audience ‘We are here to provide an education for the whole person. Our school, with its diverse community, will be a place where everyone will belong, as we grow together’.

The Year 7 pupil who designed the names of the school houses, was invited by the Baroness to cut the ribbon in the final part of the ceremony.  The ceremony was viewed by many parents and supporters of the school online via Zoom. 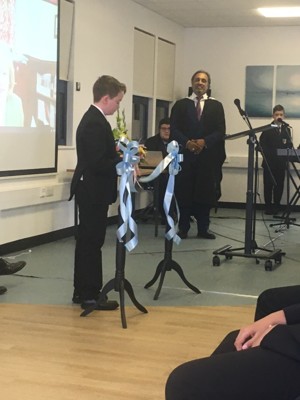